Is the Web Frameworks market share distributed equally across the globe?

In this article I’ll be comparing market share of all Web Development Frameworks between 3 Tech Hubs: San Francisco, Berlin and Barcelona. Hopefully we’ll end up having a picture of the main differences between European Tech Hubs and Silicon Valley. 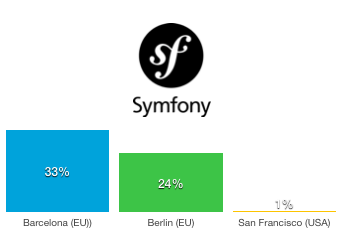 Market share in Europe for Symfony is quite different from the US were it’s almost non existent. May it be because of its French origins? Could be, Symfony was created by Fabien Potencier 10 years ago and the community of developers in EU is quite strong. In Barcelona “there are quite success stories and because of that there is a good pool of developers, meetups, etc it is kind of a circle of virtuosity“.  But there might be something else I’m missing here… 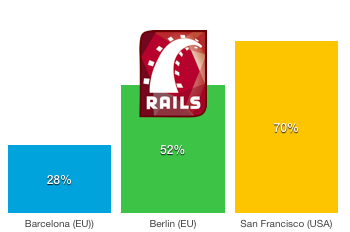 With a stunning 70% of San Francisco web Startups using it, Rails is king there. Meanwhile in Berlin it’s a far from negligible 52%. Barcelona is left behind with a still quite relevant 28%. Rails origins in US (Chicago) may have something to do with this inverse distribution in different countries.

Also note that in a scenario where Symfony did not exist, then the market share for Rails would be leveraged across the two continents.

Let’s see what happens with the rest of the frameworks we classified as Mid-Range usage in our past article. Let’s start with Spring. 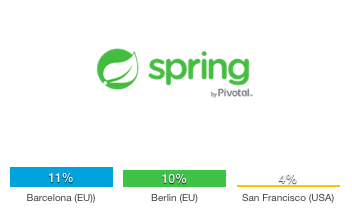 Spring is almost non existent in San Francisco (4%), we see it’s market share almost triple in Barcelona and Berlin.  Even though Spring numbers are still far below from what we’ve seen in Rails and Symfony, it seems that it still has some presence in European Startups. 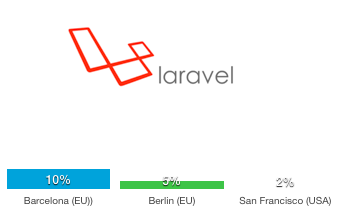 Django has a testimonial presence in Barcelona and Berlin (7% and 5% each), but we see a quite relevant 22% in Silicon Valley where it’s the second most used after Rails. Something in me makes me think that Django can only grow in Europe. Maybe we could revisit and reevaluate this information next year and see how it evolves. 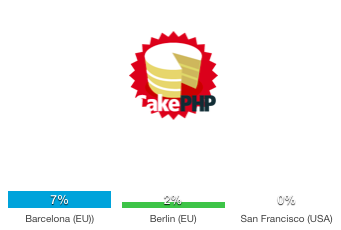 CakePHP it’s not much used by Startups in Barcelona, but I would not have expected  such low numbers in Berlin (2%). Also, San Francisco has a CakePHP categorical 0% market share.

The usage of the 3 Web Development Frameworks is as low as in Barcelona than in Berlin and San Francisco. So I won’t discuss much on these. 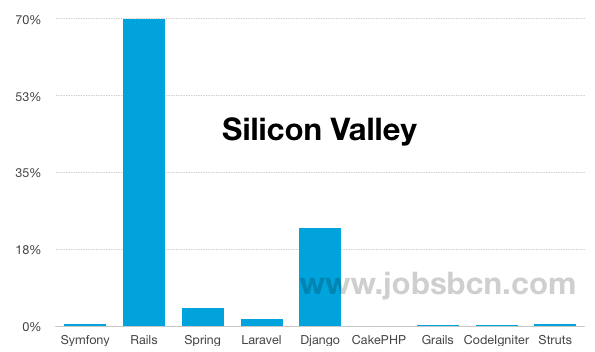 San Francisco Bay Area clearly has a strong 70% concentration of job offers with Rails as requirement. Django is following from far behind with 22% market share. 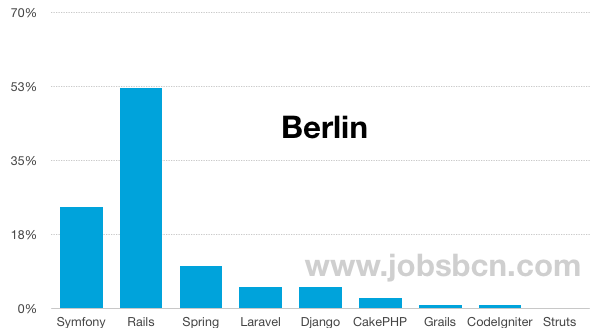 Berlin has a wider representation for all frameworks. Rails is still predominant in this city with a 52%. Following we have Symfony with a 22%, Django falls from the second position in Silicon Valley (22%) to the 4th with a 5%. 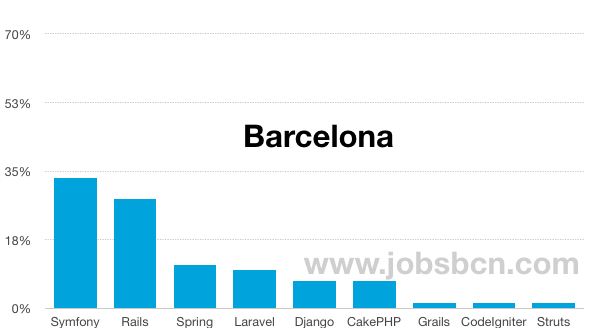 In Barcelona the distribution is quite smoother among all frameworks. To the surprise of many, Simfony wins here with 33% market share, followed close by Rails with 28%. Meanwhile, Django, the second most represented in San Francisco falls in the 5th position in Barcelona with a 7%.

To my surprise, frameworks usage among Startups is not distributed equally everywhere. There’s a certain trend worth mentioning: Ruby on Rails is everywhere, quite strong indeed.

Symfony is also worth mentioning if we are in Europe. Whereas if we are in Silicon Valley, we have to keep an eye on Django.

All in all, what we have here is just a static picture of current usage of Web Frameworks. The next question is how this will change over time.

So, do you think Symfony will grow in Silicon Valley in the next years? What about Django? will it get bigger in the European Startup Hubs?

Feel free to browse jobsBCN by searching for Frameworks you don’t see here, we might have missed one. If so, please let us know!

How this article was made:

For completeness I double-checked with the data I gathered from the latest Who’s Hiring (July 2015) post at Hacker News, limiting my search to the SF Bay Area. This results were consistent with what I’ve found at angel.co.

I’m aware that talking about Europe Tech Hubs and not mentioning London is like talking about programming languages and not mention C. The reason for this omission is that we’re not yet aware of good sources of job openings at startups that at the same time feature good keywords for technologies. Please, let us know in the comments if you know any.